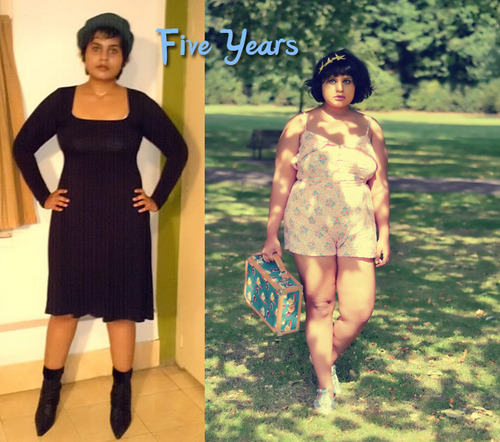 Yesterday I was prompted to combat my agoraphobia and go to Uni because I really needed to do library work. On the bus I saw a terribly saddening sight. There was a woman, a lot fatter than me with bright Manic Panic red hair and full makeup. She was also dressed in a black hoodie, black baggy trousers and black boxy shoes. I looked at her and felt really really sad. Here was a woman who clearly wanted to be noticed because she had that hair which stood out so much. At the same time she was wearing those clothes because she felt it necessary to hide her body. I know it is a pretty big assumption to make and maybe she normally dresses in pretty clothes and was having an off day. I have days like that. I have a lot of days like that in which I go out in my rotation of three daily dresses and my walking shoes. But the thing that struck me was that I saw myself in her. I used to be that person. The photo above is me 5 years ago, in my second OOTD for the Fatshionista LJ comm.

Check out the black ‘figure flattering’ dress, ‘skimming my curves’ as it did and ‘concealing my problem areas’. I used to wear a lot of black. This was actually a new dress for me, at a point when I was making an effort to dress. Here is the thing. I had always wanted pretty clothes. But growing up I had no pretty clothes. My mother was convinced that I needed to have a non female gender identity (or maybe she wasn’t even thinking so far; maybe she was just being twisted as she was wont to be) and so I was dressed in boys clothes and my hair was cut short. In my head I wanted to have long hair and wear pretty princess dresses. But all I got were either the plainest of cotton dresses or boys clothes. To this day I have a messed up gender identity, for which I overcompensate by being as femme as I can be.  But that is beside the point. I want to talk about being fat today and how that affected my dressing.

It may come as a shocker but I bought my first dress beyond that age of 10 at the age of 18. The first time I wore a skirt after childhood was then as well. After the age of 10 I grew too big to fit into children’s AND women’s clothing. I would hardly have been a size 12 then. Indian women are very tiny, yes. From the ages of 10 to 15 I dressed strictly in boys clothes, all the while craving pretty dresses and skirts. The only time I wore a skirt was at school and I hemmed the shit out of them to make them look as attractive as you could make a navy sack look. But never above my knees. Never that. My thighs were pits of horror as far as I was concerned. By the time I was 16 I was bulimic and I lost enough weight to be able to fit into women’s clothing again. I bought my first women’s jeans that year. I still remember that pair, they were a mid blue wash, flared (early 2000s, ha!) with floral embroidery around the pockets. I bought girl’s shoes too, giant platforms modelled after the Spice Girls.  By the time I was  17/18 I was severely anorexic and came down to a size 10. In my head I was still the hugest creature to walk the earth though. But that was the first time I bought a skirt. And later on, a dress. It was a denim shift from a frumptastic store called Orvis that seems to specialise in outdoor gear. But I still loved it and wore it as much as I could. By the time I was 19 I had come out of the anorexia and I was bulimic again. I started gaining weight. I stopped shopping online and packed away all my pretty size 10/8 clothes that I no longer fit. I spent my second and third semester of Uni in one tattered black kurti and flip flops. I stopped cutting my hair and removing my body hair, the latter not because I didn’t want to participate in what I now consider patriarchal bullshit, but because I had given up. I was convinced that I was ugly and nothing could be done about it. In my fourth semester of uni, in early 2007, I discovered the LJ community Fatshionista. My first babysteps into the world of fat acceptance. A couple of months later I because diagnosed with PCOS and was told to go on a diet. I dutifully did, went from a size 14 to a size 12/10 and started buying pretty clothes again. I cut my hair and bought some dresses from ASOS and felt great. And then I stopped with the diet, gained weight and this time I was determined to not feel bad. So I started filling my life with as much FA as I could and started fixing my head, not my body. This is the time around which that photo was taken. Fatshionista (later, Two Whole Cakes), Shapely Prose and The Rotund were my daily reading. Every night I would get stoned, get on my iphone and read those blogs and several others. And I was posting regularly on the Fats LJ comm. Of course, it wasn’t the all accepting place I had thought it to be and later on I discovered that people were making fun of my Third World status in a sister comm., but I got over that and eventually started blogging.

It has been a really long journey, and seeing that woman on the bus yesterday really reminded me of how far I have come. Which is why it makes me so sad to see other women who are stuck in that pit of self hatred and destroy their health and their bodies trying to be thin. I don’t know what the solution to that is. I feel like I want to help but I have no idea how to. Should I have approached her, the woman on the bus? Should I have told her “you are beautiful as you are”? Maybe, but I am also terrified of strangers. I remember the first time I was called beautiful by a guy and what that did for me. But maybe I am too invested in beauty. Beauty is not something a woman owes anyone, least of all men. Beauty shouldn’t be a goal in life, there are other things like goodness and kindness which should be. But I have spent too much, way too much of my life being ugly. I will be going back to India in a month, for good, and I am terrified. Indian women simply do not come in my size. In India I am a sideshow attraction. But maybe I will weather that too. Many FA advocates seem to think that placing an excessive importance on beauty is counterproductive and harmful and plays into those patriarchal ideals we should be seeking to rid ourselves of. And I agree. But I have also seldom been included in that conversation about beauty. I have spent a very long time looking at women who are considered beautiful and wondering why I wasn’t like them. In the last few years I have miraculously and suddenly been included in that conversation, although it has been in places that are not the country of my birth. And when I go back I will be excluded from that conversation again, unless it’s on the internet. The long term solution would possibly be to extricate myself from those ideals of beauty and reject them. But it’s like being let into the secret ‘cool girls’ club. I admire people who have been truly able to reject wanting it but I might never be able to be that person.

Today I saw that I had been followed on Twitter by someone running a so called ‘body positive’ styling service but when I looked at their site, it was the same old ‘figure flattering’ bullshit that is being fed to fat women all over. These days it seems it is just repackaged under the guise of ‘acceptance’ which is the shittiest thing I have ever seen. They are co opting our own language against us. The same old body hating, woman hating garbage is now repackaged attractively as ‘self acceptance’ and ‘self confidence’. I am just so angry. I blocked them immediately. But what about the women who don’t know about FA, actual fat/self acceptance that is, and believe in this bullshit? I just keep thinking, so many of us, who just hate themselves and what they look like, and now even the things that could actually help them are appropriated by the body hating brigade. I hate nothing more than ‘body acceptance lite’, which is just another phrase for body hatred. I don’t know what the solution is. Does anyone have any ideas?