I thought it was gone; I was a fool. It never goes away. It comes back to haunt your life when you least expect it to – when you were secure in the knowledge that you are safe, it resurfaces like a creature from the deep, an ancient demon whose light tread shadows yours so silently, so innocuously that you don’t even notice it till it has its bony fingers around your throat. It’s back and I’m trapped in its numbing grip once more, and I feel lost. My life for the last 5 years feels like a lie. After so much, so much effort, so much work put into recovering, into retraining my brain, I’m back to square one. I’m back to where I started on my journey of acceptance because that old pathology is back. I can’t eat.

Talking about this is tough. Writing about this is tough. How far have I let down all the people who look to me, my outfit posts, my writing to feel better about their bodies? I never thought I had the answers because confidence has always been something I’ve struggled with, and I seldom reached that point of total, unconditional body love. But my eating, I’d fixed my eating. Or at least I thought I did, until the old, all too familiar thoughts came back to embed themselves in the crevices of my brain. From slow beginnings shrouded in food insecurity when I couldn’t afford basic sustenance, through a resulting illness which prevented me from eating, it crept back up until, one day, I realised that I can’t eat.

I had struggled with my eating from the ages of 15 to 23 – from bulimia to anorexia to binge eating, my eating disorder had taken me down all the roads it’s possible to take in those murky swamplands. But I cured it – by learning to develop hunger signals with weed, and immersing myself in a world of fat positivity, and for 5 years, I stayed cured. I abandoned my dreams of thinness and accepted my fat body, and learned to be content in it. I met people who were enamoured of my looks – that helped immensely because after all, my ED had been triggered by fears of dying lonely and unloved. For a while, for more than just a while, I lived my life convinced that my body was no hindrance to my dreams and desires. And then, this year, a series of events unfolded to drive me back to that dark corner I’d been driven into when I was 15.

I moved back to India – a country which had managed to destroy me utterly with its rampant fat hatred. I moved back and was immediately robbed of my personhood again – people my size are hardly acknowledged as humans here. Once more, I was a freak, some species of massive, sexless, genderless land mammal who apparently has no emotions other than a pathological attachment to food. My weight is a number people don’t even perceive as real here – 100 kilos? Surely humans don’t weigh that much, only elephants and whales and hippos do! Everything around me is a stark reminder that I’m an anomaly, an outlier so far on the bell curve that it’s virtually undocumented. My size isn’t carried in stores because they’d rather focus on catering to people with 28” chests, and medical charts top out at a number that falls just short of what I believe I weigh. When I go out in public, people don’t hesitate to stare and comment, and men can’t bring themselves to say even one polite word to me in social situations. I’ve been sick for a while now, terribly, painfully sick but there is no doctor who will treat me. If I go to a doctor and tell them about the pain, the nausea, the lack of appetite and the weightloss, I’ll be congratulated and told to keep at it. This is my life now, relegated to my apartment to live out a life of loneliness, pain, and the fear that I might have contracted something that will eventually kill me. But there’s no way to know, because I’m too fat for medical practices to be ethical. 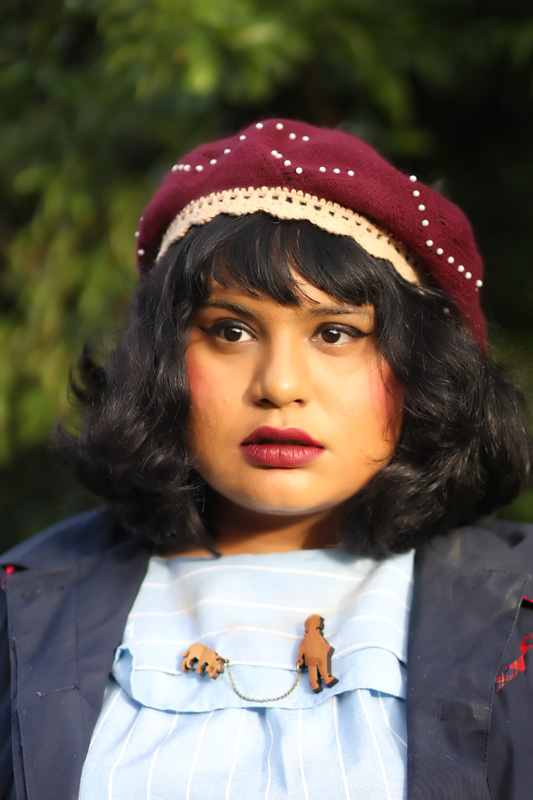 When I overcame my ED, I had a support system consisting of my then partner who loved my body and was encouraging in every way of my efforts to love it too. But I pushed her away because I was a dick, because I was incapable of romantically loving a woman, because I had dreams of going to the First World where I’d be seen as a person instead of a horror. I did go to the First World, but then I returned, and now I am here, and the tigers have found me. The isolation is hard. I miss affection, I miss affection something terrible. I latch onto my determination to move to the US next year for my MFA and comfort myself with the thought of being held in imaginary arms. But what do I do while I’m still here, still in a state of suspended animation, still in Limbo? I don’t eat.

It’s not hard. 8 years of disordered eating and the sickness in my belly has all but killed my hunger pangs. It’s easy to skip meals, to eat the tiniest amounts , to even eat the greasy, deep fried food I crave when I do feel hungry because the hunger disappears so soon. I’m losing weight in a way that’s almost scary. I obsess over my new smaller body that reminds me of my old smaller body, I find myself running my hands constantly over my newly revealed ribs, over the hipbones I can feel jutting out once more when I lie down. I measure myself constantly – right after I wake up when I’m at my thinnest, after my frugal meals when my belly swells by a whole inch, in the middle of the night and the middle of the afternoon, after showers and before I go to bed. I take pleasure in the blood rushing to my head everytime I stand up, in the way my skin moves over my ribs when I move my arms, in my newly contoured face, I take pleasure in my lengthening collarbones because I can’t take pleasure in lying in the arms of a loved one anymore. Loneliness was always the motivation behind my disordered eating, and loneliness is the motivation behind it again.

My relationships with food and my body are a cyclothymic mishmash of dysfunction and the knowledge I’ve gleaned from my years in the fatosphere. When I look at myself, I still like what I see, but I like it for being smaller; I still eat the things I crave but in quantities so small that they result in weightloss, not stabilization. Some days I feel like I want to stay at my current size, on others I dream of a magic number, and sometimes, an impossible number. The thought of gaining weight, ofcourse, is a horror too dark to be imagined. Who have I become, who is creature with thoughts so alien to my worldview? Because even through all this, I see beauty in fat bodies as I have for a long time now – I see beauty and loveliness and desirability in fat bodies, just not in my own. I don’t know who I have become. I don’t know when I’ll again be the person I was for the last half decade. I don’t know if I could ever be that person.

I have no answers, don’t look to me for them. I can’t help anyone because I, myself, am broken. All I can say is don’t be me, be whole instead. Don’t give in to the world which tells you to be thin like I gave in. Maybe things will be better once I’m in the US, maybe they won’t. Because as I am now, I don’t have it in me to fight the status quo here which tells me I’m unacceptable. It’s hard to be strong in this world, in this country, harder than what I’m capable of. For more than two years, I found myself elevated to the status of acceptability, of normalcy despite the racism I faced but now I’m demoted to being a creature again – a creature of solitude, heartbreaking, soul destroying solitude. My reaction to this sort of widespread societal rejection was always one of self destruction, like it is now. I’m a fat, outsized single working woman in a society which values women on smallness and marriageability. India values women for docility and demureness, on keeping our mouths shut and our legs spread (but only for our husbands – if you do it for too many men, you are a whore, a fallen woman, a ruined creature, a noshto meye.) I, on the other hand, am outspoken with one too many subversive, seditious ideas to be acceptable. But I let go of a central one among them because my moral fibre failed me. I don’t know what I want to achieve by wanting to be thin, or at least, smaller because the rest of my qualities, my opinions will still result in an outsider status. But it’s pathological, it’s an illness which has gripped me in its claws now, and the security of the familiar (all too familiar, way too familiar) keeps me locked in. Dreams of fragility, of weakness haunt me once more because that is the epitome of the Indian woman. We are valued for our strength only when it comes to bearing children and pushing them out.

My head is a mass of conflict, a mass and a mess, the old and the new struggling for dominance. But as they fight to rise to the top, I sink further into gloom, despair and obsession. Some days I force myself to eat, force three meals inside me in an attempt to overcome this illness. But then I relapse into a world of cigarettes, coffee, the numbness in my limbs and the weakness in my body. I am failing the test, I am diminishing even as I dream of going into the West and being accepted again, and whether I can remain true to what I still believe at the heart of me, what I still know is right – that all bodies are good bodies and fat is not an end to happiness – is a question that’s yet to be answered.