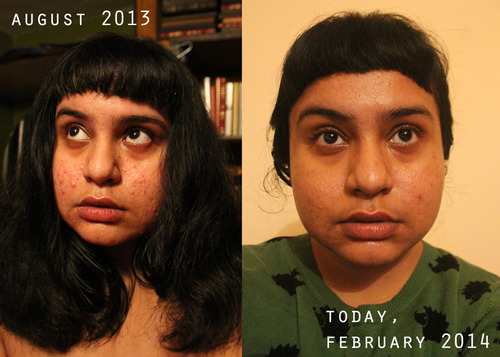 I’ve talked briefly about my skin here before. I’ve also talked about how it’s been a trial to me since I hit puberty, and how my insecurities concerning it compel me to trowel on the makeup and airbrush before uploading photos on the internet. We talk so much about fat acceptance and body image (in my corner of the internet, at least) but rarely is the topic of skin brought up, if at all. For my part, the state of my skin has played as great a role in my negative body image as my fat. Most of the “you’ve such a pretty face, if only you lost weight” comments directed at my teenage self were also appended by “…and if you could fix your skin.” This would usually be followed by a list of ‘helpful’ suggestions, none of which I surely could have tried before! Here’s a non-exhaustive list of various unctions, gels, creams and cleansers I’ve slathered on my face (and body) over the past 18 years in an attempt to achieve clear skin:

There’s pretty much nothing that I didn’t try, except for isotretinoin. I kept saving that as the last resort, as did my dermatologist(s) – a weapon to be deployed only at the bitter end. By the end of last summer, my skin was the worst it had ever been. I was 28, puberty was little more than a shadowy memory, and yet, my skin was breaking out like never before. In my desperation, I finally caved in and convinced my dermatologist to prescribe me the magic pill. I took it religiously for a week. Predictably, nothing happened, but then, I wasn’t expecting anything to happen that soon. Alright, I tell a lie. My skin showed no signs of improvement, but I got the stomach cramps I feared I would, my mood started dipping, and in any case, that shit was expensive. Isotretinoin had failed me. This was the end of all hope.

Last summer was also the worst time in a very long time, as far as my health was concerned. I was hardly eating or sleeping, and mostly subsisting on a diet of nicotine and caffeine. After smoking for about a decade, my addiction had shot up to 25 a day on my good days – the bad ones were worse, much worse. This was aided and abetted by my newfound vice: mugs and mugs of instant coffee. My skincare routine was as pared down as I could make it, and involved coating myself from head to toe with shower gel and washing it off. Looking back, it’s not really surprising that my skin just…gave up.

Luckily for me, by the end of summer, my wheezing and smoker’s cough got so bad that I was forced to cut down – in small degrees at first, and then drastically until I quit for good in December. It’s funny how last year seems so scripted in terms of my fall and eventual redemption, but that’s exactly what happened. If summer was about the destruction of both my physical health and sanity, autumn and winter brought me recuperation and healing. Not only did I quit smoking (and caffeine), I also tried to eat better, stay out of stressful situations, and generally get the kind of physical and psychological respite that I needed. (I also fell in love, and it helped, but that’s beside the point.)

Sometime around October, I also decided to switch over to no-poo for my hair. My hair had been growing steadily ever since early 2012, and in absence of any sort of maintenance and upkeep, it was little more than a shaggy, brittle mess. Raw honey was the first no-poo alternative I used, and while it didn’t work as intended, I found that I really loved it on my face. A bit of internet research indicated that raw honey was antibacterial and moisturising, which made sense, because the more I washed my face with it, the softer and smoother my skin felt. This led to an epiphany of sorts. Maybe, I thought, maybe I’d been going about things the wrong way all this time. Maybe, instead of trying to dry out my skin as much as possible, I should moisturize it. In any case, winter was on its way and winters tend to spell a terrifying combination of dry, flaky, peeling skin and aggressive acne for me. 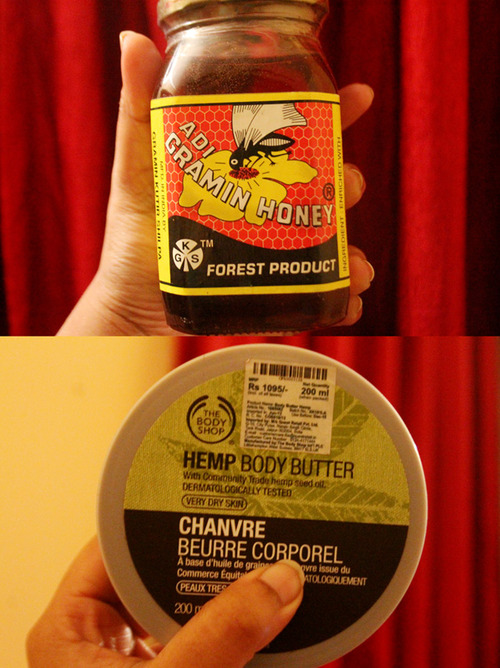 [The saviours of my skin. I prefer a Lotus Honey I get from Nepal, but this is what I use when I can’t find it.]

I decided that every dermatologist I’d ever seen was utterly wrong, and my skin needed to be hydrated as much as possible. The first thing I threw out was the soap – dermatologists had always been insistent on foaming, detergent rich cleansers twice a day, which had ever done me any good. Instead of washing my face with soap, I started coating it with raw honey 15 minutes before washing with warm water. I’d do this once a day.

The magic of the green

Then, while my face was still wet, I’d moisturize liberally with my hemp body butter from The Body Shop. This has been my moisturizer of choice for years, mostly because nothing has ever hydrated my scaly winter skin as efficiently (and I am a firm believer in the magical properties of weed anyway.) I’d have preferred to use their hemp face protector, but The Body Shop seems to believe that their customers in India prioritize skin lightening over efficient moisturising – that’s the only explanation I have for their bizarrely incomplete lines in this country, and the addition of a “fairness” range I don’t recall seeing in the UK. In an ideal world, I’d have made my own moisturizer with hemp seed oil, but that’s not something which is easily available to me.

After a bit of experimentation, I finally settled on my ideal skincare routine. I wash once a day with raw honey, and moisturise with the hemp body butter. Depending on the amount of humidity in the air, I reapply the body butter from anything between 1-4 more times at different hours of the day. I tried adding a couple of drops of tea tree oil to one of the applications every day, but it dried my skin out, so I suspect this is something I’ll find useful in the summer.

Once a week, I do a brown sugar and raw honey scrub. This exfoliates my face (and body if I’m feeling super energetic) without making it break out like other exfoliators.

When I wear makeup, I remove it with oil cleansing. My initial attempts to oil cleanse were disastrous since I was using olive oil. After consulting this chart, I switched over to primrose which works much better for me. I’d personally prefer hemp seed oil, obviously (if anyone has a source for it in India, please let me know!) Oil cleansing with my washcloth is also a decent alternative to exfoliating with raw honey and brown sugar but I’ve found that honey suits my skin best in the long run.

Products and products similar to what I use

Since I started my ‘natural’ skincare routine, I’ve only had one breakout when I wore makeup three days in a row. I’ve been trying to avoid makeup since then, and I only dabbed on a bit of concealer around my eyes and on the blotchy bits of my face for the last outfit shoot. My skin looks less perfect and featureless than usual in those photos, but I eventually hope to come to a point where I can feel confident with just a tinted moisturizer. Not only is my skin clearer now, my undereye circles and lips have become lighter as well. I don’t think my skin has been this good since I was 10 and crashed into puberty like a brick wall. I’m certainly not going to claim that going all new age-y and hippie is going to work on everyone’s skin, or all kinds of acne, and some people might not respond to anything other than isotretinoin and its like, but I think there’s some truth to the fact that in certain cases, acne can be exacerbated by aggressively drying out skin as dermatologists recommend. I’m not a medical professional by any stretch of the imagination, but I have suffered quite badly because of my zits and the resulting insecurity/ low self esteem for an awful long time now, and this was something unexpected that worked for me. So if you feel like nothing short of nuking your face is going to get rid of your zits (and if you aren’t allergic to any of the things I listed) you could give this a shot! And even if it doesn’t work, you won’t have spent a fortune, AND you’ll have some delicious raw honey for your pantry.

For more information on oil cleansing, you could check this out.

Also, it’s important to distinguish raw honey from commercial varieties, and this is an useful guide.